You are going to die with those lugs, Pt. II 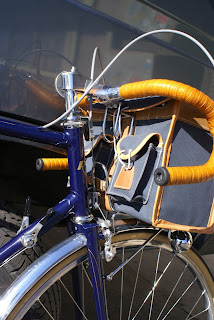 I would be remiss in not telling the rest of the story of the previous post. Over the years I have displayed at bicycle trade shows- Interbike, NAHBS, Portland Manifest and some local Nor-Cal 'Meet your maker' pop-up parking lot shows. For the most part these shows are more of a social thing for me-I don't wind up writing orders but it is good to be present and show custom bike people that you still are in effect. 2017 was a year where I didn't participate in any show and 2018 is likely to be the same.....when you are as busy as I am the time just isn't there. I'll miss seeing my frame builder buddies out there.
Back to the story. I mention the shows because at more than one of these shows I was approached by a man, probably in his 70's who took some very ornate and ancient looking lugs out of a little bag and showed them to me. He asked me how much I would charge to build a bike with them. He looked at me as if he were offering me the opportunity of a lifetime-he really was presenting these lugs as some sort of holy grail of frame building and that it would be a tremendous opportunity for me to have the task of using said lugs to build a frame, as if the lugs would make the frame a masterpiece. I was not able to come up with a price so off the old man went with his lugs.
Years passed and at another show the same man presented me with the same lugs and the same offer-at the time I wondered how long this man had been walking the aisles of bike shows with this one set of lugs. I also wondered where he got them and when. Evidently the old man never heard what he wanted to hear from me or any other builders regarding his prized set of lugs. I'm not sure that they ever got used at all......I wonder what happened to the old man and his lugs.
The whole situation he presented was kind of destined to go nowhere as a set of lugs might work for a certain frame and not for most others. The old man was fairly short, maybe about 5'5"-5'6". Making a frame for him would involve bending the crap out of those ornate old lugs to get the proper angles for a smaller frame. This would no doubt be difficult and time consuming. There's also no guarantee that the lugs would look perfect when all the modifications are done, at least in my hands.....and my hands have been doing this kind of work since 1978 ! Essentially, there's no way I could give an accurate estimate on building a frame with a set of lugs that I have no experience with and also don't know the angles and tolerances of. This is why I could not come up with the words that would make the old man trust me to build his dream bike with his prized set of antique lugs.
While I build welded frames about 99% of the time, I do offer lugged frames and have probably built around 250-300 in my career. Pricing these frames is tricky but I can do it as long as I know what I am working with in terms of materials. When I go out of the comfort zone the cost of the project gets much harder to quantify. For this reason , my collection of older lugs has been gathering dust for decades. I'm not anxious to interrupt the flow of productive work to do a vanity project-yes, that's a pretty cold word for it but in my shop that's what it would be. It is unlikely that I would be able to do the job I want to do with these older lugs and still get anything close to a living wage.
When I am old enough to collect social security and if I don't die before my house is paid off I will be in a position to attempt to build some frames with these old parts. It is doubtful that the old man with his lugs will ever look me up again to build his dream bike but at this time I am the old man with not just one set of old lugs but with many. I could just leave these antiques for the next generation to build with but I have this odd feeling- with my connection to the era when some of these lugs were new, I have a duty to use them. This is a sentimental notion and really does not speak to who I have been as a builder for a very long time-kind of like people riding in the Eroica on bikes they lusted after as teenagers but don't use as their weekly go-to bikes. It's not logical and it is not meant to be-it is only another trip to a romanticized fuzzy memory of sorts- one that may very well remain a memory and not take shape as an actuality in the present.
Posted by swiggco world at 10:54 AM No comments:

You are going to die with those lugs 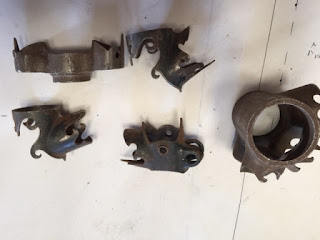 In my shop as in just about every frame builders shop are materials and fittings . Most of these bits will wind up in frames over time but there are things in boxes that could be considered " Pieces for projects in the future ". These are materials that we as builders seem to accumulate with the idea that at some future time there will be an occasion to use these parts in some sort of pet project. As for me, I started out on the hunt for cool lugs, bottom bracket shells and fork crowns with the idea that I would attempt to build rolling works of art-not as a profession but as a sideline, a part time hobby.

Back in the late '70's finding any good materials to build bicycle frames with was not easy. There were only a few US sources for tubing , lugs and dropouts. These sources were very small outfits with little or no advertising budgets-to find these sources one had to find a frame builder or bicycle shop who knew who the sources were. There was no internet and not much of a bicycle culture and almost no bike building culture at all. My very first materials were garnered from a company called "Proteus Designs". Proteus was run out of a bicycle shop in Maryland and they not only sold frame tube sets but they also published a frame builders handbook with the author credit going to a Dr. Paul Proteus- a non-existant character. The book was most likely written by a few of the shop staff who did build frames and likely had done a bit of research on the subject.
The other sources for materials back in the beginning were other builders-some who were active and some who were quitting. To this day nearly 40 years along I still get materials from builders who call it quits. I have accumulated much of this stuff and some of the lugs are older than me. The stuff that doesn't fall in my lap from other builders is mostly stuff that I sought out thinking that I wanted to build a magnum opus - a real over-the-top masterpiece some day. I would need some really special and rare bits for such a monumental project.
Here it is, 2017 and I have some boxes of old lugs and fork crowns- many of these I have had since 1980. One would think that maybe it could be time to face the possibility that the likely hood of these parts ever finding use in my shop highly unlikely. That thought did not keep me from buying yet another ancient set of lugs last week-the ones in the photo. I purchased these ornate lugs from a builder who is ending his career-that builder is Bruce Gordon. He was selling off his entire inventory of tools, jigs, bikes, parts and frame building materials. It is what we will all have to do as builders eventually. Bruce had some really fine sets of lugs out on a work bench but this particular set caught my eye. There was an ancient crumpled note in the bag with the lugs. It stated: " Thanks for your prompt payment. I hope that you find a good frame builder ". This makes me think that Bruce bought these lugs before he had ever built a frame. That would put the purchase date some time in the early '70's, about the time I was in high school.
So- what am I to do with these and all the other old bits from frame builders of the past ? What makes me think that I am going to do with this stuff that all the other builders never got around to ? I'm sure that more than one person came into Bruce's shop and upon seeing those lugs said " You are going to die with those lugs ". Well, Bruce......you are not going to die with those lugs- you can thank me for that. I am likely the one who is going to die with those lugs.
Posted by swiggco world at 9:09 PM 2 comments: