An appeal to my readership 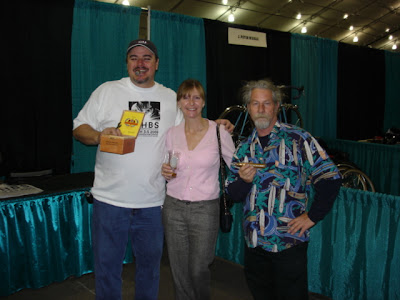 Well, it isn't 2012 yet but the word is out -the big Handbuilt bicycle show will be coming back to the west coast, to Sacramento in particular. You have read my views on the whole concept of bike shows, bikes as rolling art, bikes as something to obsess about..........all of the things that make a bike show what it is. You all know by now that I do support the gathering of frame builders and am in fact quite enthusiastic about it , even if some if the stuff at bike shows can make me gag violently. The fact that shows like this even exist is a real luxury for old geezers like me who started building frames when just finding a couple of tubes was an adventure.
I have given my opinions to all of you freely , practically projectile vomiting them on you in vegetal streams of unconsciousness at times-this was for our mutual amusement, of course. I have called out all sorts of dastardly and unsavory practices in my trade and am not sorry to have done so. My feet will be held to the fire for all of my numerous failings and I accept the punishment , however painful it may be. My bretheren must be able to endure the fire if they decide that they don't need to do the right thing by the folks that pay them . Now, at this time I am asking you- the readers of this blog for your opinion , or vote. Should I display at the upcoming 2012 NAHMBS ?
O.k., so why am I asking all of you ? Obviously , I'm not able to make this decision without checking in with the folks that have bothered to read all of my rants. What I'm going to do is to put together a multiple-choice quiz like I have in some earlier posts. Yes, I know I stole the idea from the NYC bike snob but it is a good idea and I doubt that he would mind at all.

Having three full days to talk and breathe bikes would be:
A. Gosh, such a dream....
B. Shit, that's what I do five days a week
C. A recipie for a migraine
D. I guess it depends on who was in the booth with me...


There you go, folks. Be sure and write in and tell me if you think I should go and be part of the scrum that is the handbuilt bike show. I value your input more than you would think. This is a difficult decision for me, even with the show being so close to where I live and knowing that so much material for this blog would be waiting for me. Just the same , I only want to do it if it is the right thing to do. Thanks and good night.
Posted by swiggco world at 7:53 PM 13 comments: 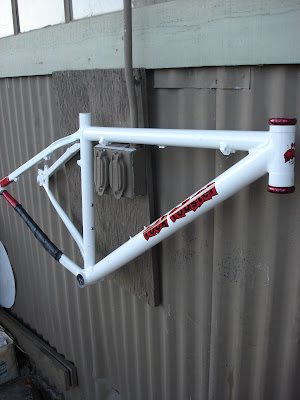 Howdy, folks. Are ya ready for a story ? Well, it is story time again with the over opinionated one-not my usual rant about the wonderful world of bike builders and all that they do....err, don't do.....err, say they are going to do.....and in some cases actually do it. I digress....
A couple of months ago I built a bike for a customer who knew exactly what he wanted in the way of a 29er hard tail, right down to every detail. His geometry was not what I would have used but I figured that his riding experience in So-Cal was extensive enough that he had a good idea of what he was asking for. He was very specific about the components as well-again , most of the stuff was not from my typical go-to list of bike hardware.
When the time came, I built the frame and ordered the parts. When the whole bike was together I rode it around the shop complex. As soon as I took the first left hand turn I knew that this bike rode better than my own MTB-better in fact than most of the bikes I had built all year. I was stunned......a customer had come up with the best 29er geometry I had ever ridden ! I even liked the parts selection.....everything integrated perfectly and after just a few minutes of pedaling I wanted this bike ! Of course, I couldn't keep it as it was not mine-frankly, I could not afford to keep it even if I wanted to. What I decided was to keep the drawing handy so that I could make one for myself when I got the time some day. Later that afternoon, with a heavy heart I carefully packed the bike into two boxes as to ship some items separately to help keep the bike frame from getting damaged. I fully insured the bike and sent it about 400 miles south to its new home.
When I got home from work the next day I got an email from the customer. It seemed that the 7005 aluminum frame had gotten dented and it was pretty much my fault. I had not used firm enough padding on the top tube to protect it from the brake lever that had been zip tied to it. MY guess is that the UPS handlers probably didn't go too easy on the large box, either. The customer asked for a new frame. At first I just wanted to repair it or have the painter fix the small dent.....that was until I thought about several things: # This customer paid for a new bike, not a repaired bike, not a touched up bike.......a new $ 4,800 bike-it was my job to provide him with nothing less than that. There was another thing.....that small dent that was a major factor for the customer was not something I would care about if it were my bike, and hey......it was now going to be my bike !!!
When I told the customer that I would build him a new frame as soon as I could he was really impressed. He told me that this was the kind service that made him happy to have chosen me. I think he really would have been happier if I had padded his bike a little better but he was willing to wait for the new one. He offered to send the first one back but I told him to ride it and let me know what he thought. I guess he felt the same way I did......so now both of us would have the same frame-a very odd situation but in the end two people are happy.
I sold my 26" wheel MTB and started saving for the components for the new frame. Here's the thing-I have been building 29ers since 2003 and have not really been too keen on the wheel size . My take on it was that it was a tall person's bike and I just wasn't tall enough. Every time I had made an attempt to build a 29er for myself I either couldn't find the time or just sold the frame before I could build it up. I guess this frame was telling me: " Come on.....don't just build these bikes......get off your ass and ride one so you can know what the hell they are all about !" I had been on the outside of the whole 29er thing for eight years, all the time building them for other folks. Now this was no longer the case-I have my 29er. I'll be sure and let folks know how it rides. Thanks for reading and don't worry.......I'll get pissed about something and write in the usual nasty style when the time is right.
Posted by swiggco world at 9:30 PM 4 comments: