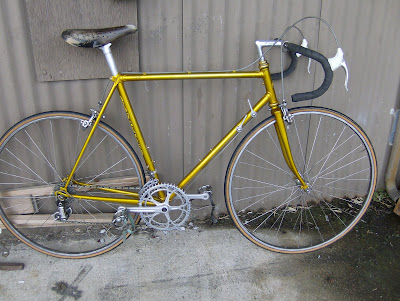 Back in 2007 ...or was it 2006 ? -Hell, I don't know...all I know is that I tried to pander to the gawkers at the San Jose NAHMBS with a stainless lugged frame. I am not known for doing this type of work but I still wanted something with some shiny bits to fool the primitives.....which is a really coarse way of saying that I wanted the folks to know that I, too was able to build a nice rolling house of ill-repute fit for the Maharaja of whatever.
The frame was an arduous undertaking and I was to find myself seething after many hours of dealing with the labor intensive process of getting a frame like this together. After the first two days I christened the frame :" The bike that hate built " as it wore me down like no frame had done in a decade or more. It turned out quite nicely and was quickly sold after the show for about half price. During the show it did not attract much attention-what folks were really gravitated toward was bike # 5, a time trial bike I built in 1979...primitive and dusty, this old dinosaur was the star of the booth. This was an epiphany of sorts for me-the history of what I have done was much more appealing to people than the attempt I had made to be Mr. 'fancy bike '. I took note.
Now it is 2012 and I fully intend to fill my 10x10 foot space with older work, some of it older than a good many folks showing frames at the show. One bike I took down from a hook in my shop is a road bike from 1982. I remember it as being a bike that I had never crashed, never even fallen over on....something of an anomaly for me. I always crash my bikes....it's in my nature. This 1982 bike is so stable, so friendly of a bike that it won't let you crash ! -At least, not yet. So....I took it down, put some new tires on it for the first time in about 14 years and have been riding it a bit. made this frame and fork with no fixtures of any kind, just a hand drill, some files and a torch and tanks. When I took out the rear wheel to mount the new tire it glided out of the bike. The same thing happened with the front wheel......I was stunned. I knew that I had liked this bike immensely and had ridden it a ton for nine solid years before building something to replace it. What I didn't expect was the precision.
So now it is still 2012 and I am bringing this bike and six others to the show...most with grime and crappy paint-some with a good deal of wear and tear , but all of them authentic bikes of their respective periods. These were all my own personal bikes and they all did some sort of duty-built of some inspiration back in the day. They may be old, but in their time they were good-I can't imagine building frames the way I did back then and getting the precision that is evident , such as the 1982 bike. I'm not blowing my own horn here.....I'm honestly in disbelief that I was able to pull it off......a really nice straight frame and fork built in neanderthal conditions.....primitive and for the most part, clueless.
I accept that folks coming to see the show are looking to see who is out-doing who.....what new take on traditional framebuilding will shake the foundations of the craft-how cleanly the shorelines of the stainless lugged rolling heirloom quality frames can be. For me, the shoreline I'll be thinking about is the one to my right as I'm rolling down highway one north of town on my 1982 bike , still in effect, still good and still under the art-bike radar....as am I.
Posted by swiggco world at 9:02 PM